More than a year into the pandemic, many countries including ours continue to struggle with its impact in our lives. Statistics can only inform, or attempt to reveal so much. And the longer this state of standstill continues, it’s unsurprising how many of us turn to any semblance of normal any chance we can get.

Online music shows have been providing reprieve at a time when we remain barred from physically congregating. Beloved music venues have been permanently shut down, some have been converted to vaccination sites, while others remain closed for the time being. Most recently, venues with outdoor settings have slowly begun producing small-scale live performances again, albeit sporadically.

As our most (and still to many, only) feasible and tangible access to live music these days, online music events attempt to fill the live music experience gap before and during the pandemic. But far more than offering nostalgic, escapist value, it has also revealed the many pitfalls of the local music industry: job insecurity, the diminutive value often assigned to local music, and severe lack of concrete policies and infrastructure that should have been protecting the industry as a whole are just some of the most glaring issues that affect countless gig workers in the country.

But to be absolutely clear: These issues have always existed but our romanticization of the arts as a valuable but ultimately extricable part of our lives has inhibited our society from fully investing in it. It has always been an abstract concept: as if it’s a naturally occurring phenomenon and not a product of labor, much less a cultural currency.

On the hopeful side, local music communities across the country have been trying to strike the balance between creative integrity and sustainability on all fronts. Cebu-based music label Melt Records’ upcoming online music show Melt! Melt! Melt! In Your Home!, which will be taking place over two weekends (today and on July 10th), aims to make the most out of our current limitations by showcasing nine regional music acts from its roster, including indie rock-dream pop band UJU from Dumaguete; Bacolod-based singer-songwriter Chelsea Dawn; ambient artist Francis Cang a.k.a Obsolete. from Cagayan De Oro (CDO); bedroom producer Magic Mundane from Koronadal; and Cebu mainstays Britpop-new wave act Sunday Sunday, experimental artist Lynel, indie pop quintet Honeydrop,  experimental pop musician Coloura, and Music Lane Okinawa alums KRNA. Aside from the music performances, the program will also include short interviews in-between sets. Melt Records also hopes to use the occasion to raise vaccine awareness. “If we want to get back to a state of being able to do live events again, this is the way to get there,” they told The Rest Is Noise. 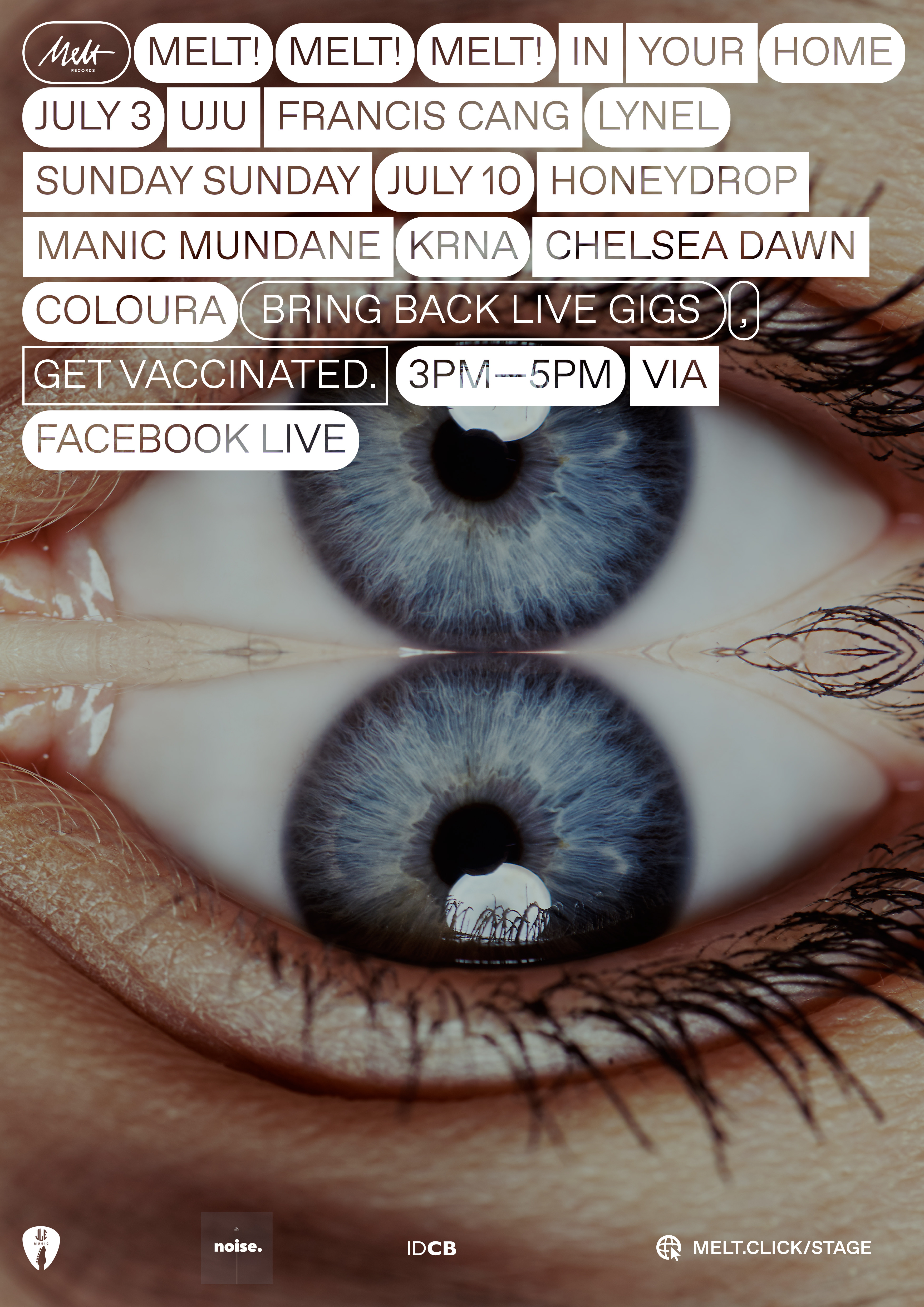 We caught up with co-founder Dexter Sy, head of PR Debb Acebu, and some of the participating artists about their preparation for the Melt! Melt! Melt! In Your Home! and checked in on their local scenes in the south.

This interview has been lightly edited for clarity.

What was the overall experience like curating a full online event?

Dexter Sy: It’s definitely been challenging. To be honest, we wanted to do this in December of last year, but it was just too much work for the time and we knew very little about how to carry it out. It’s been interesting learning from recent virtual events we’ve watched and participated in and seeing what was doable within our resources and capabilities.

What are the unique challenges to moving the live music experience to a digital event? Alternatively, what do you consider are the benefits of it?

DS: First of all, the internet, nuff said. Haha. We’ve done smaller-scale live streaming, and internet speed and stability was always the biggest issue to overcome. Another challenge that’s been more fun to deal with is just the goal of trying to translate the best parts of the live music experience and also creating new experiences that are only doable (or much more practical) in a digital setting. Personally, I have to say I’m quite in my element trying to do this as someone who works on software for a living, though definitely there’s a lot that’s irreplaceable with live music that we can only hope to make a little more real for the audiences.

Debb Acebu: One challenge for me, I guess, is keeping up with the technical stuff that is needed for this show to be realized. So I had to learn about the ins and outs of knowing how to stream online shows (whether it’s small scale), which somehow also helped me learn a skill, I guess, while we’re still in quarantine. That’s aside from the fact that we’re battling quarantine fatigue and trying to cope up with all of this by at least making a semblance of what we were used to doing before (organizing Melt live events, etc.) but this time, on a virtual setup. I can only wish for the best, really. *sighs*

What are the goals you’re trying to achieve with the show?

DS: As with any live event, our primary intent is to give a venue for these artists to express themselves in performance, which we believe will always go far beyond what is possible in a studio recording. Similarly, it’s also our goal to give these artists’ audiences an opportunity to watch them in a live setting, something they’ve been deprived of for the last year and a half. Backstory, as a label, we’ve had opportunities to start working with artists in the middle of the pandemic (e.g. Chelsea Dawn, UJU, Manic Mundane, Francis Cang), and I realized I had never watched some of them perform live, even in archive videos, especially as some of these acts were formed at the height of quarantines. So, a bit of a selfish agenda maybe? But I definitely would like to satisfy this curiosity for myself as well.

As with any live event, our primary intent is to give a venue for these artists to express themselves in performance, which we believe will always go far beyond what is possible in a studio recording.

DA: For me, I guess it’s about giving the artists another platform to share their music, which essentially is what makes us thrive and sane these days as artists. As a label, it’s also like introducing “new” acts from the Melt roster who recently released new material last year and this year and allowing them to showcase what they are as a performer even under virtual circumstances, for now. Apart from this, we are also campaigning for vaccination awareness given that the nature of how we promote music entails gathering people (pre-Covid times), so it’s something that we are also hoping people could pick up from the show.

You mentioned one of the features of the event is that it will stream from multiple cities, which are also representative of the various backgrounds of the artists from the Melt roster. Can you share with us how the music communities in these areas are doing: first in Cebu where the label is based, and in these cities more than a year into the pandemic?

DS: While live gigs have obviously ceased for the last year and a half, there’s been a pleasantly surprising influx of new music (and artists) coming out of Cebu and the rest of Vis-Min on a regular basis. A lot of these are bedroom producers but quite a lot have done studio work as well. It’s definitely a wonderful thing how musicians have stayed productive despite the limitations. Overall, it’s been a test of how far you can go relying purely on the digital space and the results so far have been very encouraging.

Kath Dizon (Manic Mundane): Like many other places nationwide, the pandemic hit our music scene really hard without a warning. Koronadal is a small city in Southern Mindanao. We don’t have many big events taking place here most of the time, plus the music scene itself was already struggling pre-pandemic, so it felt pretty awful that the only few existing venues for the local bands and artists fell silent last year.

Every gig used to be a source of hype in this place—it’s a communal space for creative people and the connection between music and Koronadaleños is undeniably strong.

The architects of the independent music scene in this city have been tirelessly fostering further live and original music for years. 2020 was supposed to be a punch as there were big plans lined up for up-and-coming musicians to promote and play in Luzon. Last year, however, shuttered through the wake of the pandemic.

Currently, it’s good to see musicians starting to release original music again and innovate via livestreams and virtual gigs. Although the digital solutions have remained strange in this place, seeing artists trying to look for opportunity in the middle of a mass amount of chaos while considering isolation, I guess, helps ease some pressure and anxiety.

Our scene is very unique and has been so uniquely affected. It has really encouraged everyone to collaborate, share resources, and survive this together.

We are also campaigning for vaccination awareness given that the nature of how we promote music entails gathering people (pre-Covid times), so it’s something that we are also hoping people could pick up from the show.

For now it’s all about the uncertainty of it all. It will surely take more health and creative solutions and good will, but as an independent music scene from Mindanao, we are proudly coming together to make sure that at the end of this there’s still going to be live music.

Chelsea Dawn: The music scene in Dumaguete used to be so rampant. From alternative to blues to folk to disco to reggae and so on. But when the pandemic hit last year, it got massively affected. It went from Mellow Mondays, Blues Tuesdays, Reggae Wednesdays, Alternative Thursdays, and disco weekends to almost nothing at all. Dumaguete has gotten quiet. A collective of musicians have gathered to do online gigs though. There were a bunch of those. It became what we now call the “new normal.” Whether it’s in school, work, etc. Everything’s most likely done virtually. It also kind of made the bands and artists be more productive as it does get boring when you’re always inside the house. Gotta keep that creativity on fire. Although sometime earlier this year, the music scene started to bloom again, slowly. There were occasional intimate gigs and open mics until the second wave of Covid hit. Right now, it’s really pretty bad. There’s numerous cases of covid. But since virtual gigs exist now, it hasn’t totally gotten that quiet like last time.

KC (KRNA): CDO’s music scene is steadily rising up again in-spite of the pandemic and it’s beautiful to see. A lot of up-and-coming artists here are releasing really exciting material and they’ve even captured the attention of established indie labels in the capital. The music scene community has been burgeoning as well. And a lot of cool cafes/venues and small business owners have been opening their doors to house gigs and connect with the art scene. It’s very exciting to think about the future post-pandemic gigs we’ll have!

Melt! Melt! Melt! In Your Home! will stream for free via Melt Records’ Facebook page today, July 3 and next Saturday, the 10th.