Words and Illustration By MC Galang

“There are very few instrumental rock bands here in Korea,” Joseph Lee shared with me over coffee a few months ago in Seoul’s arts and culture mecca, Hongdae. His band, DABDA (also stylized as dabda), is among a handful of local artists in the fringe of what’s collectively dubbed and marketed as “K-indie” in South Korea—a catchall phrase that capitalizes on the popularity of the K-pop phenomenon by hastily prefixing all music made by Korean artists based on its place of origin.

For one thing, this marketing strategy denotes only geographical association, but in many cases, may misleadingly suggest that other Korean-made music also subscribes to the “idol” system in some way or form or even remotely sound the same, which is simply and realistically not true. Unfortunately, this sweeping generalization is a typical byproduct of massive global cultural movements like K-pop. In an NPR feature on Korean pop music, Zandari Festa’s Cecilia Yi notes that “musicians without the kind of capital that idol systems possess—their ability to train, invest, promote, et cetera—just can’t survive easily.” Moreover, she lamented the problem: “Idol music isn’t just one part of the Korean market. It’s a monopoly… This is poison for artistic diversity.”

This myopic understanding of South Korea’s music industry is endemic, too. Yi shared with me back in April that “the local market works quite differently than other countries, so we try to widen the knowledge and share what’s going on in the world with the locals.” To put into perspective, Korean music export amounted to US$513 million in 2017 compared to only US$14 million imported into the country in the same year. This suggests the heightened focus on globalizing Korean music for foreign audiences. Its popularity is mostly attributed to K-pop’s “catchy rhythm and chorus,” with dance-oriented songs cited as the preferred K-pop sound by avid listeners. 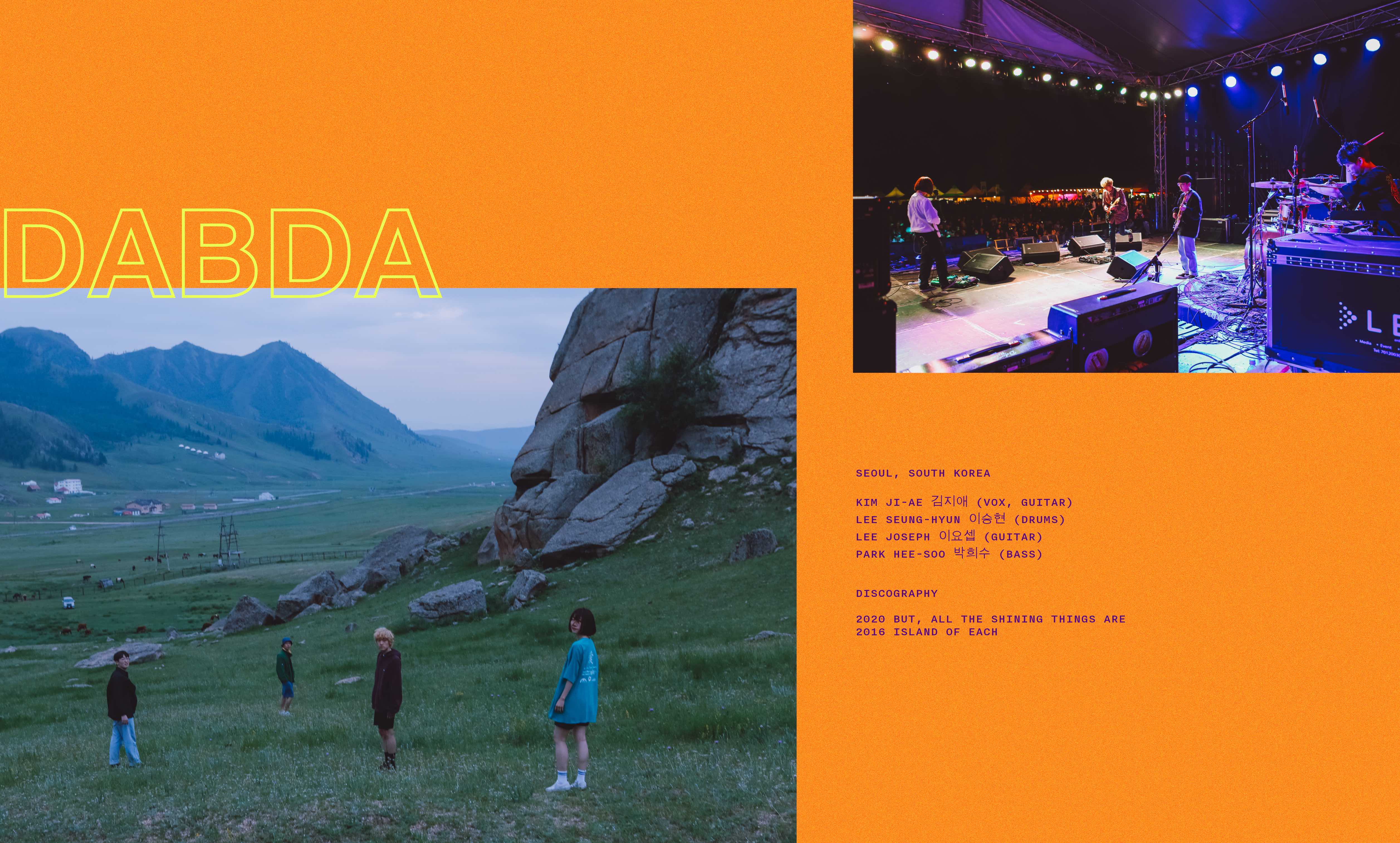 Neither of these categories fit DABDA’s repertoire. Composed of Kim Ji-Ae (vocals and guitar), Lee Seung-Hyun (drums), Lee Joseph (guitar), and Park Hee-Soo (bass), their music is best described as a nexus of instrumental rock and psychedelic rock. Their first EP, Island of Each (2016), and its follow-up singles “Loss of Rawon” (2017) and “Look of a Dream” (2018), served as a sampler of obvious math-y influences that at best introduced an audience not entirely exposed to the genre. The band felt that the EP’s limited format hindered them from exploring the full scope of their creative process as they wanted. “We were not satisfied with how our EP and singles came out due to its rough nature and rushed development process. That was why we wanted to make our first full-length album as carefully planned and executed as possible right from the very beginning,” Joseph tells me.

The four-year gap allowed DABDA to take full advantage of the long play. But more importantly, their latest full-length record, But, All the Shining Things Are, also therapized an increasingly weary band even before the pandemic hit South Korea. “Having to make more songs and working on them non-stop for two years has been physically and mentally exhausting. We were all worn out even before the recording started. By that time, we had planned for a fundraiser for our album and had just made it public with a lot of worries of it not being completed. However, opposite of what we thought, the fundraiser actually got fully funded in a matter of days, giving us a major morale boost and confidence in ourselves. We truly thank everyone who has helped us during that period. It meant a lot to us.”

On restrictions and representations

Joseph and Seung-Hyun told me stories about their experience as an independent band in Seoul and how local bands typically gain and grow an audience, illustrating a different market behavior. For instance, I found out for the first time that Spotify was not available in South Korea (the leading streaming platform is Melon; although Apple Music is also an option, albeit far less popular). In an increasingly digital world, TV appearances remain to be a big deal, with around seven active music programs broadcasted nationwide. Billboard’s Caitlin Kelley writes that “South Korean music shows have incorporated international participation through social networking sites… Every music program has its own regularly updated YouTube account, which allows other people out of South Korea to have a chance to view the artists’ performance. It offers a larger exposure of K-pop acts to other parts of the world.”

With gentrification and an export-targeted music business disproportionately affecting local artists that don’t have the resources of agencies and big record labels, bands like DABDA face unique challenges trailing far behind the success of K-pop. “Compared to the massive K-pop or K-hip-hop scenes, the band music scene itself is still very irrelevant in the market so in order to survive or become mainstream, it is not a secret that you would have to follow a certain trend within the scene in order to gain some attraction,” Joseph admits.

However, he believes the lack of diversity at the moment can be wielded to the scene’s collective benefit. “We feel that the ratio of other genres within the band music scene is becoming more and more even, including math rock, which is a good thing because it encourages other bands to do what they feel like doing without worrying much about a certain scene or audience. Overall, the different band music scenes in South Korea are more likely to be able to perform all together due to the sheer number of bands coming out so it is yet not so concerning about a specific scene being niche or not.”

Read: On K-pop and Little Joys

Fortunately for DABDA, rigid categorizations are not exactly prerequisites to breaking ground outside their home country. In the past, they’ve worked with Korea Creative Content Agency and Platform Changdong 61 cultural complex in Seoul to help them fund overseas performances and mount live shows locally.

The band has been touring internationally since last year and was planning to mount one to promote their latest album before the borders closed. “We think it is always good to reach out to different audiences and scenes around the world when you get a chance. We had a great time and a lot of feedback last year after playing a couple of shows in Europe and also at Playtime Festival in Mongolia so when we got back, we planned on going out internationally with the start of our full-length album. It has been a rough time since the pandemic this year but we want to try out touring internationally when everything goes back to normal. Just as we had a great chance of opening for Elephant Gym on their South Korean tour, traveling to other countries and playing with different local bands that we like would be amazing.”

On But, All the Shining Things Are, DABDA explores the range of atypical song structures that mostly defined their earlier work, allowing their songs to expand beyond fixed sonic templates. Their current artistic choices feel less devoted to solely demonstrating technical aptitude, avoiding the dangers of recycling similar-sounding patterns throughout the record.

One of these welcomed, more pronounced shifts is Kim Ji-Ae’s vocal work: allowing it to complement some of the LP’s loftier sections, such as opening track, “Light Comes Back” where Kim’s vocals were reversed and looped—somewhat reminiscent of one of my favorite openers of all time, M83’s “Intro”; or in “Look of a Dream.” The band describes their sound as “pastel psychedelic,” an identifier that connotes specific imagery fitting the mood of the album. Its title was derived from Hubert Dreyfus and Sean Dorrance Kelly’s book, All Things Shining, and its overarching theme, which according to the band is written “from a perspective and life of one who’s unable to get out of nihilism and lethargy.”

“After finishing a song, we never expect to see what’s coming next, so it has been very difficult to maintain the emotion or message we wanted to tell throughout. But after [we’re done with] the actual album, we were really glad that the message or the flow of emotions has not been lost and has been expressed in a way that we would not have expected before. We really enjoy how the songs speak back to us in their own unique ways,” the band describes. “Finally, we all knew that Ji-Ae was a good lyricist as well but this time around, we were amazed at how great her lyrics were. It’s a bummer that the message won’t be expressed fully to foreign audiences due to all of them being in Korean. We would definitely love to tell you its stories when we get the chance one day.”

In many ways, But, All the Shining Things Are embraces the human impulse to use stories to make sense of the world and our realities, creating structures that allow us to function, evolve, and thrive. “During the planning stages of the album, we never imagined that the situation would become like this. When COVID-19 was declared as a pandemic and the situation in South Korea was going through mass infections, it happened during our recording but thankfully, the recording process has gone through without any hiccups and we were really glad for that. We had to cancel all live show events, including upcoming showcases and events which stopped all types of live performances to support our recent release. We are trying to plan for an online streaming showcase but we’re not entirely sure how it’s going to go because we are more comfortable and suited in a live environment so we are also thinking of having a small-scale live show with numerous cautious means to prevent any type of infection possible,” Joseph recounts.

In many ways, ‘But, All the Shining Things Are’ embraces the human impulse to use stories to make sense of the world and our realities, creating structures that allow us to function, evolve, and thrive.

Moreover, transitioning to online events is simply not sustainable for the band. “Online streaming of shows has been growing for quite awhile now. However, it costs a lot of money to have an actually decent or good-quality streaming show so it is currently true that planning out a streaming show in the indie scene all by yourself is quite hard without the help of a major label or some sort of investment or support. Even so, we try to concentrate first on online shows or small-scale live shows if possible and after the pandemic, we plan to have an international tour. We hope that everything goes quickly back to normal.”

That the album exists in spite of these extraordinary circumstances (or because of it), proves how our natural inclination to protect ourselves with a healthy degree of optimism is not always an invitation to disaster. As DABDA puts it, “Just to keep on living, we might just choose to forget and dilute the real meaning of life. It might feel like an unending tunnel of nothingness but maybe if we think around, does that mean we might be living because there is something to live on to?”

Raw Material: Francis Reyes and “In The Raw” Remembered

“This Side: Thailand Vol.1” Playlist